I'm very glad to announce the release of KStars v2.7.0 (Menkab)! This new version brings improvements all over the board, from speed improvements, better cross-platform support, and Android mobile/tablet support is now finally merged into mainline KStars!

Here is a short demo made by Artem Fedoskin, our GSoC 2016 student and currently an active developer of KStars:

We are still working on a few minor issues with the KStars Lite for Android before we release it soon on the Google Play Store.

Using KStars on embedded devices such as Raspberry PI provides a much better experience now thanks to order-of-magnitude speedups made by Akarsh Simha that cut some computation cycles by over 50%!

Another important feature is object internet lookup from online catalogs! It is a very exciting feature developed by Akarsh that enables you to find any object whether it exists in KStars catalogs, or any online catalog. Akarsh made a great video to explain how to use this neat feature:

Significant changes were made to improve Ekos GUI. It is now much more compact and accessible, especially on low-resolution displays. 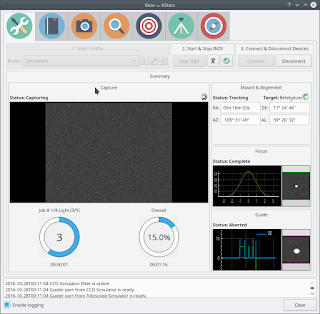 Internally, the guide module was completely rewritten to enable support of multiple external guiders. Now we support lin_guider in addition to PHD2 and of course the internal guider. Performing guiding and autofocusing is now a lot more intuitive since the FITSView is embedded within the module, and not as an external window in prior versions. This streamlines the astrophotography workflow even further and makes monitoring changes quite handy. 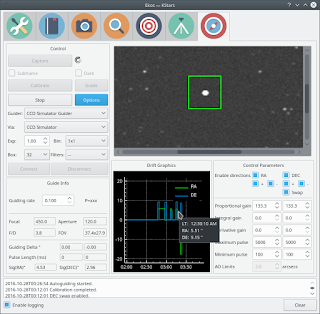 The guide drift graphics was rewritten in QCustomPlot and provides many facilities to inspect the data along with zooming and panning support plus the long-request RA/DE legend! Guiding control parameters were updated to provide finer control over the guiding process and can control not only guiding pulse corrections, but also their polarity within each axis.

The alignment module received minor improvements as well, but most importantly, it now detects parity after first capture and reuses this value for future captures. Reusing the parity should cut solving time in half since the astrometry.net solver attempts to search over both positive and negative polarities by default. The overall alignment GUI was made simpler with only options necessary to perform the alignment process remaining while all additional options were moved to the KStars settings. 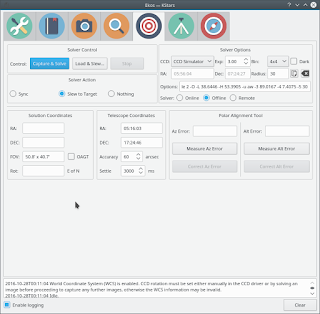 Focus module also received significant updates! All focus operations are performed from within the embedded FITSView. Furthermore, the user can now select which focus algorithm to utilize to calculate the Half-Flux-Radius (HFR) value. I developed a new gradient-based focusing algorithm in addition to the previous centroid and threshold algorithms. This new algorithm is less susceptible to noise and gives far more accurate HFR values even for donut-shaped stars. It is used by default but the user may change to any algorithm at any time. 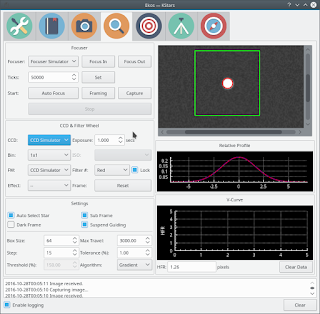 In previous versions, each Ekos module supported capture of dark frames, but each module was handling it separately. Furthermore, the dark frames were captured, subtracted, and then discarded. With 2.7.0, a universal dark library was developed whereas dark frames are reused once they are captured. By default, dark frames are reused for 30 days. When any setting that may affect the dark frame validity such as binning, exposure time, temperature..etc is changed, a new dark frame is captured and stored for future use. This is now shared across all modules, so if you take a dark frame in the focus module, it can be used across Ekos.

Additionally, the capture module also received a face-lift and now includes options to specify upload mode and remote directory to save images. This resolved a conflict where one directory was used to save remote and local images. The user may also pause/resume sequences whenever desired. 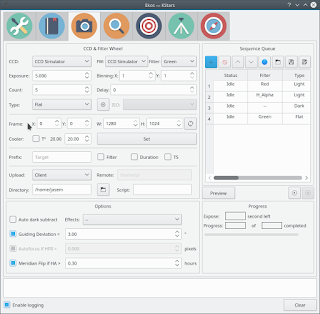 The following summary is written by our newest development team member: Robert Lancaster. Robert was instrumental in bringing many improvements to the FITSViewer tool and KStars support on Mac OSX.

The KStars FITSViewer and its embedded FITSView have received numerous enhancements with KStars v2.7. First, the FITSView zooming behavior has been refined so that if a point in the image has been selected with a marker or if there is a focus/alignment box in the image, by default it will zoom in or out on that point. If there is not a point selected, the zooming behavior will center on whatever region is currently centered in the FITSView viewport. In addition, for people who have track pads attached to their computer, the pinch gesture has been implemented for zooming in and out on any FITSView. A second useful trackpad gesture that was implemented in any FITSView is the pan gesture, so now you can not only use your trackpad to pinch for zooming in and out, but you can also use it for panning around the image easily. For those who do not have trackpads, clicking to drag the image for FITSViews that are embedded in the FITSViewer was implemented to make it easy to pan around the image. 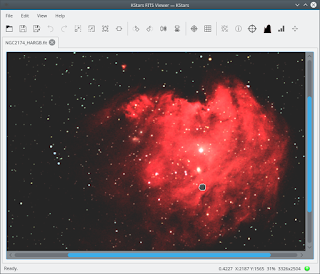 Another set of additions to the FITSViewer is several overlays that allow you to more easily center objects in the FITSViewer and/or compose your exposure. One overlay, the Cross Hair, gives you a target in the center of your image and two axes, so you can see the horizontal and vertical centerlines of your image. This overlay is extremely important for those who are not using the Align Module to do their telescope alignment so that they can be sure they have centered the star that they are using to sync. A second overlay, the Pixel Grid, gives you a full grid overlay for your image so that you can quickly estimate pixel distances to different points in your image and easily compose your shot. These overlays can be turned on at the same time and will not interfere with each other. 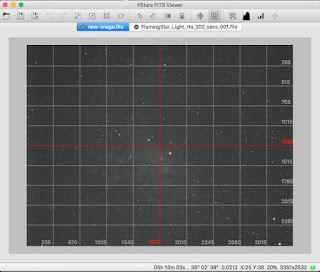 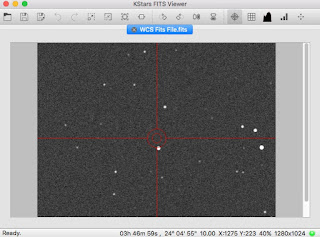 A third major enhancement to the FITSViewer is the addition of several features that make use of the WCS Headers in WCS-enabled FITS files. If you have installed and set the correct path to wcsinfo and have already plate solved an image with your setup, then your images you take with Ekos will have WCS information in them. You can also add WCS Information to an image by using either the online plate solver from nova.astrometry.net or by using the command-line based plate solving routine solve-field. The good news is that the WCS information is loaded in a separate thread so it does not slow down the rest of the program. Once an image with WCS header information in it has been loaded into the FITSViewer, the new WCS based tools will be enabled. The first thing you will notice when you load such a file is that the RA and DEC of your mouse cursor will be displayed in the status bar at the bottom of the FITSViewer. This behavior is not new, but what is new is a feature where you can put your mouse over a deep sky object in your image and a ToolTip should pop up that identifies the object. 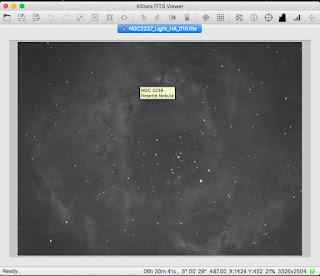 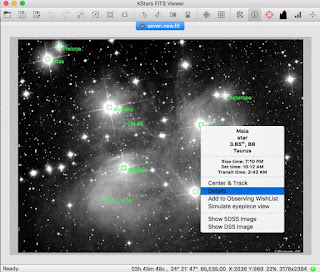 There are also several other functions in the FITSViewer toolbar which are useful to WCS enabled images and whose buttons are only enabled when an image containing WCS information is loaded. The first one of these is an overlay plot, which puts an Equatorial Coordinate grid on the image with regularly spaced and labeled gridlines. The second button overlays a set of marker points and labels for all of the deep sky objects identified in your image. A third button will enable a mouse tool that will let you click on any point in your captured image to re-center your telescope on that point. This is extremely useful for framing your deep sky photos 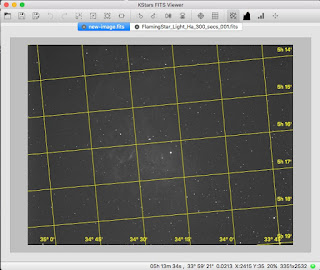 Finally, this new version of KStars provides greatly enhanced support for the Mac OS X platform. While an installer is still in the works, and some bugs are still being worked out, KStars has become fully functional on the Macintosh platform. Several months ago, KStars was very difficult to install on the OS X platform and even when it was successfully installed, numerous features were not working properly. After a successful install procedure was finally hashed out in mid-September 2016, the work of getting all of the bugs identified and worked out could begin. Over the course of the next month, numerous issues were identified, investigated, and in many cases, solved. One of the first issues was getting the icons working since kde icon themes are not supported in OS X. This issue was resolved by bundling the icons. 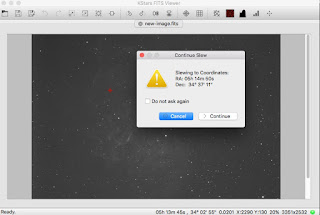 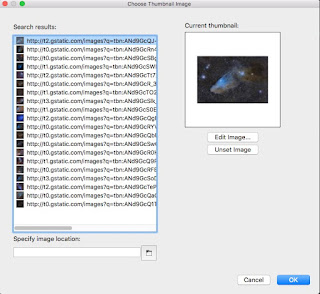 Another issue was getting astrometry.net, libinidi, and gsc properly built and installed so that the tools used by Ekos could have native support on OS X. The solution here was just to develop a procedure to install them, though on Mac OS Sierra, there may still be an issue installing libindi on some computers. Even so, KStars on OS X could still access remote INDI-servers. By the end of September, KStars was working pretty well on OS X, but it still needed some work. For OS X, the inclusion of pan and pinch gestures in the FITSView/FITSViewer as described above are vital on a computer like a Macbook because the gestures are much easier to use than the scroll-wheel emulation. Once the FITSViewer upgrades were finished in mid-October, work on the KStars OS X bugs could resume. A minor annoyance was that all the windows were independent of one another and thus sometimes, dialog windows could end up lost behind the KStars main window. This was resolved by making many of the KStars windows Tool windows on OS X, except the Ekos Manager, the INDI Device Manager, and the FITSViewer which each received special code to make them stay on top of the other KStars windows. One of the last major bugs in KStars on the OS X platform was the inability to load/use the “Get New Stuff” Download Manager. This feature is very important for downloading images of deep sky objects and different sky catalogs. It was finally resolved in late October by setting some environment variables and launching the KDE program kdeinit5 from within KStars. 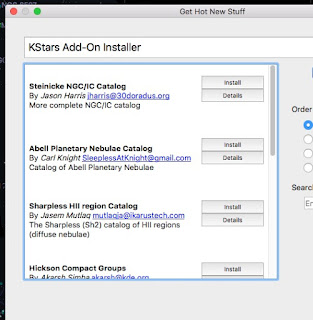 While KStars is now fully functional on OS X, it is still being tested and more bugs are likely to be found. It is hoped that in the near future, a simple installer or dmg image file can be developed for a streamlined installation process. But until then, following the instructions should get you a functional KStars installation on OS X. 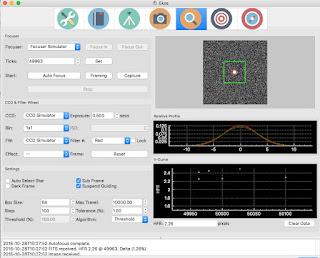 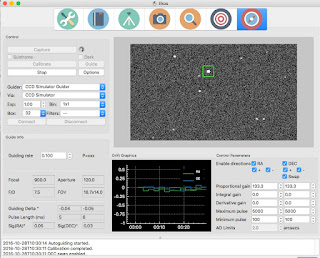