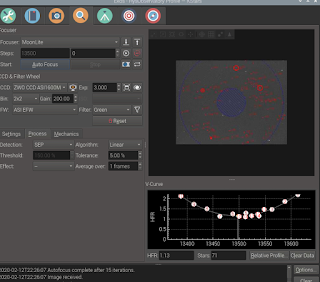 Posted by Jasem Mutlaq at 11:24 AM No comments:

This release incorporates the continued improvements to KStars base while introducing new long-awaited features in a few areas.


Hy Murveit implemented adjustable and fast stretch controls for mono and color images within the FITS Viewer. These allow fine changes in Shadows, Midtones, and Highlights clipping even for high resolution astro-photos.

Adjusting the controls do not change the underlying data, only the previewed image. After any stretch adjustment is made, the user can always revert to the automatic stretching again by clicking on the small wizard icon at the bottom right corner of the controls panel. 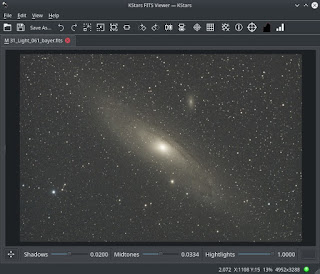 Hy Murveit developed a new experimental linear focusing algorithm.  Linear focuser is a simple autofocus algorithm that always scans in, sampling at regularly spaced intervals. It may be slower than the other algorithms, but the hope is that by minimizing direction changes backlash will be minimized and the algorithm may provide more stable autofocus results.

This change also introduces an interface that hides the implementation of the autofocus algorithm, and future changes may moved the other existing algorithms into this framework.

Linear focuser mainly works well when started near the ultimate focus position. It depends on the step-size, max-travel, and tolerance parameters, which should be chosen well. It may take more iterations to find focus than the other algorithms. 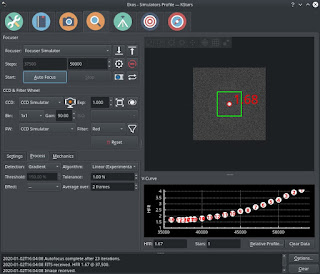 Piotr Zyziuk improve Focus Module in Ekos by adding autofocus support for DSLR's that use manualfocusdrive command by gphoto instead of rel_focus_position for example, Nikon Z6 manual focusing only works in the "liveview" aka "preview" mode (with mirror up). In "non preview" mode the focus motor is only controllable by the autofocus engine. This change should also be applicable to Canon cameras.

KStars now includes an option for a new standard western sky culture, thanks to work by Edgar Scholz over at sternenkarten.com. The constellations from this sky culture are based on work by H.A. Rey. They are often more intuitive and easier to remember than the classical Greek and Roman inspired constellations. The new sky culture mixes the best more intuitive representations from both worlds in addition to completely new shapes painted by Mr. Scholz himself.

Posted by Jasem Mutlaq at 4:44 PM No comments: