Yesterday, I field tested Ekos Alignment Module using EQMod for Linux driver with my Orion Atlas telescope. The module utilizes astrometry.net solver to find the actual celestial coordinates in a given image, making scope alignment quite a trivial procedure with amazingly accurate GOTOs.

To use Ekos for alignment, first you have to put your telescope in the starting home position, which simply means that it should be leveled and pointed at the North Celestial Pole (NCP), if you are in the northern hemisphere. With my mount (HEQ5), I have a polar finder scope so pointing it at the NCP was quite trivial simply by adjusting the mount altitude and azimuth knobs until polaris is within a small circle designated in the polar find scope. 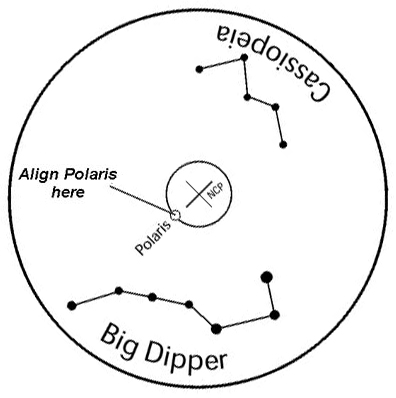 Next, I fired Ekos and started it with two drivers: EQMod & QSI CCD INDI drivers. It would have been possible to use the Synscan driver, but the driver is very limited compared to EQMod. After you use EQMod, you never look back.

Then I asked EQMod to track a nearby star. Now this is where the magic of Ekos comes. You don't have to do anything yourself! No more looking in the eye piece or CCD image to align your scope. You just hit "solve" and it figures where in the sky the telescope is really pointing. Once it finds a solution, you can ask it to either sync the telescope coordinates to the solution coordinates, or sync and slew back to the target we were tracking just earlier. I set it to "Slew to Target" and I had to stop the first iteration of the solver because it was taking too long, but after adjusting some options (as you can see in the video), the solver only took 8 seconds to find a solution.

Each time the solver finds a solution and syncs, an alignment point is added to EQMod Alignment Model, which is N-Star by default. The more alignment points you have, the more accurate your slews become. I then asked EQMod to track another nearby star and repeated the same process, this time the solver only took 2 seconds. Finally, to show that the alignment is really working, I slewed to M31, took an image, and it was dead in the center!

All those exciting Ekos features are coming up in the next KDE 4.12 release. Have to give a shout-out to Jean-Luc Levaire, INDI EQMod driver developer, and Dustin Lang from astrometry.net for all their hard and beautiful work!

Check out this Youtube video showing the whole process!