Robert Lancaster worked on improving PHD2 support with Ekos. This includes retrieving the guide star image, drift errors and RMS values, among other minor improvements and refactoring of the Ekos PHD2 codebase to support future extensions. 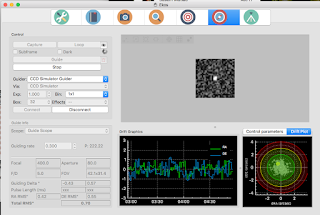 Furthermore, Robert added drift plot support to Ekos Guide module which provides a visual indication of the accuracy of the guiding.

The Ekos Guide module received further improvements to make it more straightforward to use with end users. The calibration button is now removed and performed automatically whenever guiding starts. The user can clear the calibration at any time to restart the process.

Meridian Flip support improved with various fixes to post-meridian-flip operations including autofocus. Filter Manager received several fixes to improve filter switching during various phases of the capture process. Users can also control when to run the In-Sequence focus check. By default, the check is executed after each frame, but now can be configured to be executed only after several frames are captured.

A minor but quite useful addition is the Meridian Line. It can be turned on so that users can get a visual indication on how close the mount is to executing a meridian flip procedure. 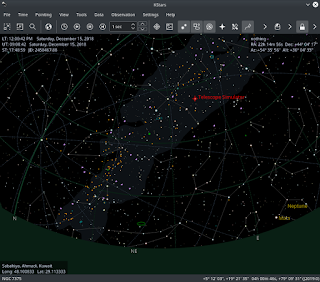 Enjoy the new release, and do not forget to report any bugs or suggestions over at bugs.kde.org.