KStars v3.3.7 is released for Windows, MacOS and Linux. This late autumn release packs a lot of new features and fixes across the board.

ASTAP is an astrometric plate solver, stacking of images, photometry, and FITS Viewer application available for Windows, MacOS, and Linux on multiple architectures.

KStars included support for solving via ASTAP in the Align module in addition to the existing astrometry.net solver. ASTAP employs a different method to solve images making it extremely fast  while at the same time requiring a smaller star catalog compared to other astrometric solvers.

You need to download and install the G17 Star Catalog for ASTAP to work locally.

The error reporting was improved to show the overall error in arcsec. Furthermore, the Align module initial FOV is calculated from the camera and telescope parameters (no longer default to 0x0'). This make the initial solve with a wider search radius faster compared to a blind solve. Once the exact FOV is measured, the search radius is reset to the default value to expedite subsequent searches.

Wolfgang Reissenberger continued his outstanding work on the observatory module by adding a dedicated weather widget with live plotting for each parameter. 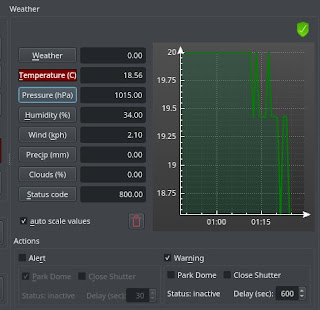 When capturing images, previously once the capture was complete, images were written to disk, then read back, then displayed in the fits viewer (if enabled), and finally the next image could be captured. This delayed the next capture by a few seconds.

With this change, the FITS data is displayed using (a copy of) the INDI blob sent to INDI::CCD, a memory buffer, and the FITS data is written to disk on a separate thread, which does not block the next capture nor the display of the INDI data.


Eric Dejouhanet Fixed HFR calculation in the FITS Data class, which was accumulating integer instead of double values.

This led to incorrect consolidation of HFR over multiple stars in the focus procedure and incoherent results in full-frame mode. 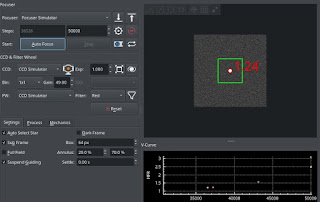 The UI received an overhaul as well to make the various settings more accessible. Each detected star HFR is now displayed next to it.


Eric Dejouhanet implemented customizable dusk and dawn offsets (D23869). This introduces two new Ekos options, located in the Scheduler option pane. Dusk (resp. dawn) offset will apply a positive or negative hour offset to today's astronomical dusk (resp. dawn) when scheduling observation jobs.
The dawn offset and the pre-dawn offset are cumulative, but the dawn offset allows an earlier or later dawn to be used both while scheduling and executing.

The resulting dusk-to-dawn interval is displayed in the Scheduler UI on the right side of the Twilight checkbox. If the Twilight restriction is checked, the modified dusk and dawn values will be used to schedule the observation job to night time.

If the Twilight restriction is not checked, the observation job will not depend on night time and the modified dusk and dawn will be ineffective in scheduling that job.

The dusk and dawn offsets can be modified from the Ekos Scheduler options, and the night time interval displayed in the Scheduler UI will be updated when applying the changes in that dialog. 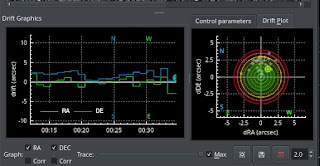 Fixes an issue where if the user hits the stop button while guiding in the PHD2 interface, then the user restarts guiding from PHD2, Ekos did not pick up the guide state change since no settling occurred and the user didn't click guide in Ekos.
Fixes an issue where the guiding data was not put into the graphs if the user did not enter a focal length into PHD2. Formerly the solution was to put a warning in the Guide log, but users ignored that. Now this tries to set the current CCD, so the backup method can work the way it was intended to work.
Furthermore, the guiding module now shows directional guiding label to help see which directions are affected by the pulses.