I'm glad to announce that KStars is now available on Microsoft Store in over 60 languages! It is the first official KDE App to be published by KDE e.V on the MS Store.

Currently, KStars v2.9.8 is in the store and should be updated every stable release. 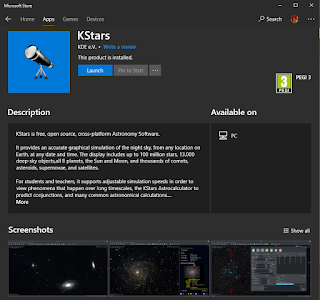 While KStars has sand-boxed packages for both MacOS & Windows, we are still missing a Linux sandboxed package. Earlier attempts at packaging a Snap package failed and I didn't pursue it further due to lack of support. Additional work at creating an AppImage also failed due to a few technical issues with linuxdeployqt and SSL. If anyone can help us create a Snap/FlatPak package, that would be great.

This release on the Windows Store would not have been possible without the tremendous work done by Hannah Von Reth. She played a pivotal role in setting up the infrastructure and tools necessary to make this work, thank you Hannah!
Posted by Jasem Mutlaq at 10:28 PM 1 comment: