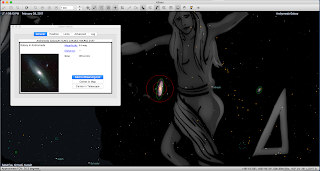 Posted by Jasem Mutlaq at 1:37 PM No comments:

KStars 2.7.4 for Windows is released!

Glad to announce the release of KStars v2.7.4 for Windows 64bit. This version is built a more recent Qt (5.8) and the latest KF5 frameworks for Windows bringing more features and stability. 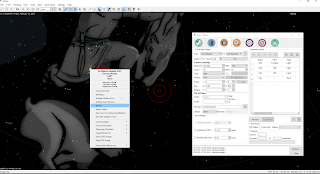 This release brings in many bugs fixes, enhancements for limited-resources devices, and improvements, especially to KStars premier astrophotography tool: Ekos. Windows users would be glad to learn that they can now use offline astrometry solver in Windows, thanks to the efforts of the ANSVR Local Astrometry.net solver. The ANSVR mimics the astrometry.net online server on your local computer; thus the internet not required for any astrometry queries. 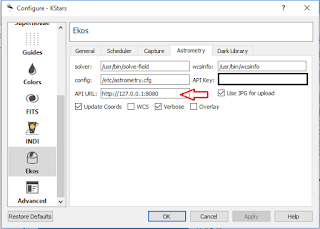 In Ekos align module, keep the solver type to Online so it would use the local ANSVR server for all astrometry queries. Then you can use the align module as you would normally do. This release also features the Ekos Polar Alignment Assistant tool, a very easy to use spot-on tool to polar align your mount.

When setting up a German Equatorial Mount (GEM) for imaging, a critical aspect of capturing long-exposure images is to ensure a proper polar alignment. A GEM mount has two axis: Right Ascension (RA) axis and Declination (DE) axis. Ideally, the RA axis should be aligned with the celestial sphere polar axis. A mount's job is to track the stars motion around the sky, from the moment they rise at the eastern horizon, all the way up across the median, and westward until they set.


In long exposure imaging, a camera is attached to the telescope where the image sensor captures incoming photons from a particular area in the sky. The incident photons have to strike the same photo-site over and over again if we are to gather clear and crisp image. Of course, actual photons do not behave in this way: optics, atmosphere, seeing quality all scatter and refract photons in one way or another. Furthermore, photons do not arrive uniformly but follow a Poisson distribution. For point-like sources like stars, a point spread function describes how photons are spatially distributed across the pixels. Nevertheless, the overall idea we want to keep the source photons hitting the same pixels. Otherwise, we might end up with an image plagued with various trail artifacts.

Since mounts are not perfect, they cannot perfectly keep track of object as it transits across the sky. This can stem from many factors, one of which is the mis-alignment of the mount's Right Ascension axis with respect to the celestial pole axis. Polar alignment removes one of the biggest sources of tracking errors in the mount, but other sources of error still play a factor. If properly aligned, some mounts can track an object for a few minutes with only deviation of 1-2 arcsec RMS.

However, unless you have a fancy top of the line mount, then you'd probably want to use an autoguider to keep the same star locked in the same position over time. Despite all of this, if the axis of the mount is not properly aligned with the celestial pole, then even a mechanically-perfect mount would lose tracking with time. Tracking errors are proportional to the magnitude of the misalignment. It is therefore very important for long exposure imaging to get the mount polar aligned to reduce any residual errors as it spans across the sky. 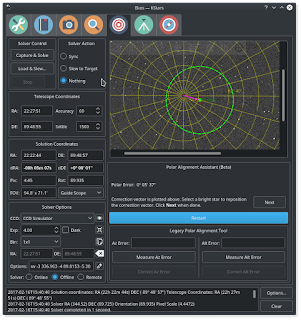 Several polar-alignment aids exist today, including, but not limited to:

Out of the above, the easiest to use are probably QHY's PoleMaster and SharpCap's Polar alignment tool. However both software are exclusive to Windows OS only. KStars users have long requested support for an easy to use Polar Alignment helper in Ekos leveraging its astrometry.net backend.

During the last couple of weeks, I worked on developing Ekos Polar Alignment Assistant Tool (PAA). I started with a simple mathematical model consisting of two images rotated by a an arbitrary degree. A sample illustration of this is below: 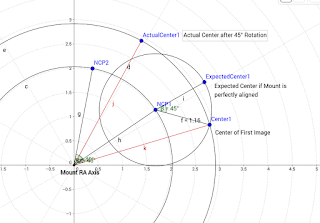 Given two points, we can calculate the arc length from the rotation angle, and hence the radius. Therefore, it is possible to find two circle solutions that would match this, one of which would be the mount's actual RA axis within the image. Finding out which solution is the correct one turned out to be challenging, and even the mount's own rotation angle cannot be fully trusted. To be able to uniquely draw a circle, you need 3 points. So it was suggested by Gerry Rozema, one of INDI venerable developers, to capture 3 images to uniquely identify the circle without involving a lot of fancy math.

Since it relies on astrometry.net, PAA has more relaxed requirements than other tools making it accessible to more users. You can use your own primary or guide camera, given they have wide-enough FOV for the astrometry solver.

Moreover, the assistant can automatically capture, solve, and even rotate the mount for you. All you have to do is to make the necessary adjustments to your mount.

The new PAA works by capturing and solving three images. It is technically possible to rely on two images only as described above, but three images improves the accuracy of the solution. After capturing each, the mount rotates by a fixed amount and another image is captured and solved.

Since the mount's true RA/DE are resolved by astrometry, we can construct a unique circle from the three centers found in the astrometry solutions. The circle's center is where the mount rotates about (RA Axis) and ideally this point should coincide with the celestial pole. However, if there is a mis-alignment, then Ekos draws a correction vector. This correction vector can be placed anywhere in the image. Next the user refreshes the camera feed and applies correction to the mount's Altitude and Azimuth knobs until the star is located in the designated cross-hair. It's that easy!

Ekos PAA is now in Beta and tests/feedback are highly appreciated.