A lot has changed in the last few months in Ekos, KStars advanced astrophotraphy tool. The powerful builtin sequence queue is more robust now and can support in-sequence autofocusing, autoguiding limits with dither support, and autopark functionality. The astrometry.net based alignment module has been improved to support the online astrometry solver using Web Services, thereby eliminating the need for an offline astrometry solver that requires gigabytes of star indexes in order to solve.

Coupled with an ever improving INDI drivers, Ekos provides users with a complete astrophotography stack in Linux. While the majority of Ekos development takes place indoors with the help of INDI's powerful device simulator, nothing beats on-site testing with all the hardware connected and ready to go. So a couple of days ago, I decided to put Ekos to the test!

Since I live in a heavily light polluted area about 30 KM south of Kuwait City, my friend and I decided to conduct the astrophotography session some 100 KM away northwest of Kuwait in AlSalmy desert. It's a quite desolate desert, but it is more rocky than sandish so that would help a lot in case we get some wind our way. After setting up the equipment (Orion Sirius EON 120mm APO, QSI 583 CCD, Lodestar autoguider, and Moonlite focuser), I performed the initial autofocus routine, followed by plate-solving a frame in order to establish the telescope's actual position in the night sky. Before Ekos alignment module, this process would take anywhere between 10-20 minutes to get the scope properly aligned using 2 or 3 star alignments, and even after that, the GOTO might not be accurate. With Ekos alignment module, GOTO is highly accurate and it increases in accuracy with each subsequent frame captured and solved.

Using Ekos Sequence Queue, I added 4 jobs, each consists of 6x300s exposures in each filter (Hydrogen Alpha, Red, Green, and Blue). Then I used the Guide module to calibrate the guider and start the autoguide process after slewing to NGC6992 and engaging tracking.

After the light frames were completed, flats and darks were taken. The flats were captured using an artificial uniform light source. Due to a temperature of 39 degrees Celsius in the desert (around 8:15 PM),  the CCD was only cooled to zero degrees.

The next day I downloaded all the images to my desktop and used PixInsight to process them. PixInsight is a really powerful tool if mastered well, and there is still a lot of learn from this great tool. I ended up with a decent image that was captured and processed 100% in Linux! 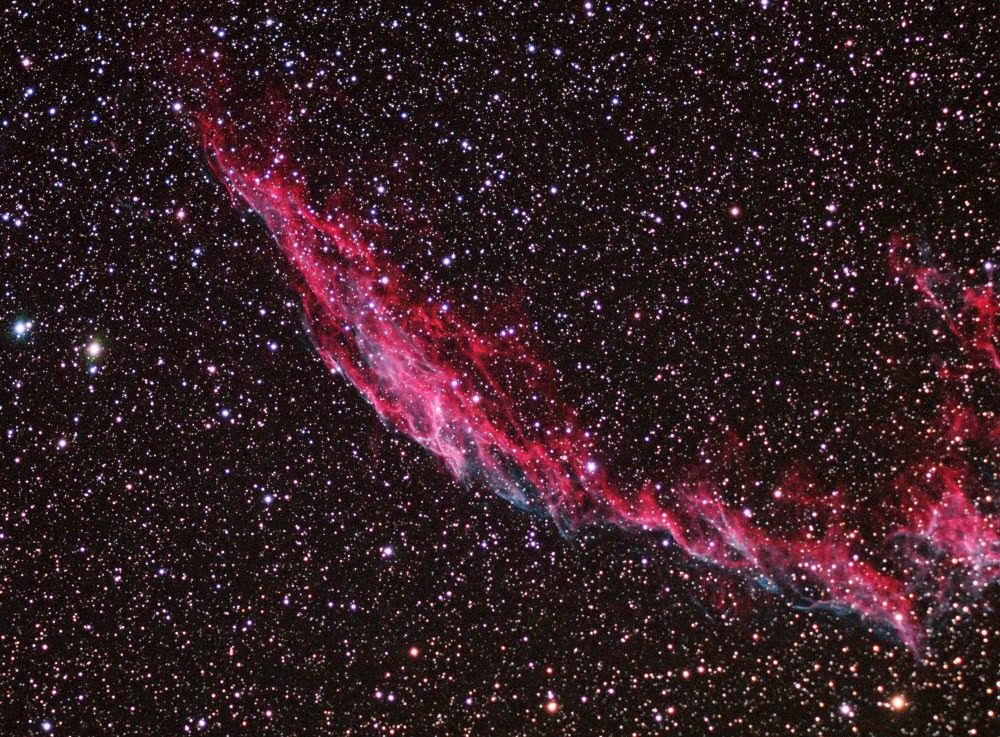 One the great strengths of the INDI protocol is that it is based on a Server/Client architecture where commands are sent back and forth in XML over TCP/IP. Therefore, network transparency is built right at the protocol level and it makes distributed data acquisition and control quite trivial.

For the last few months, I have been running all my astrophotography gear (HEQ Mount, QSI CCD, Lodestar Guider, MoonLite focuser) on my HP laptop using INDI & KStars/Ekos. As it was getting quite cold recently (even in Kuwait it gets quite cold!), I found myself using VNC to access the laptop which sits with all my equipment on the roof. While the performance was OK since it is a local network, I was curious to try to use Raspberry PI (RPi) to run the INDI server and drivers, and connect to them remotely from Ekos.

Building and installing the drivers on RPi was straightforward. Due to power limitations of the RPi, I used a powered USB hub to connect all my equipment. That worked pretty well, and to my surprise, everything worked without a hitch from the first time! I used a USB WiFi dongle on the RPi and gave it a static IP address as well.

Connecting to the RPi from Ekos was straight forward, and I was able to carry on 6+ hours of continious image aquisition, guiding, and focusing without any issues! While all my equipment only sit less than 20 meters away, the same principle is applicable to 2000 km away as long as you have a reliable network connection.

For those curious about using RPi with their astro gear, I wrote a tutorial on getting started with INDI & Raspberry PI.
Posted by Jasem Mutlaq at 7:00 PM 2 comments: