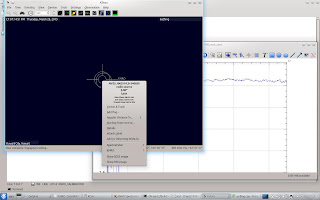 In the next few days, the goal is to fine tune the pointing accuracy and to calibrate the overall system noise. Finally, I'd like to thanks the developers of Kst for making such a great program! I use Kst to stream real time measurements from the continuum spectrometer, and this saved a lot of development time and effort. Kudos to the Kst team!
Posted by Jasem Mutlaq at 12:12 PM

Nice project! I happen to be interested in radio astronomy myself, and I'm also trying to build a radio telescope in my free time (an interferometer at 408MHz currently).
I'm looking forward to hearing more about your project! Do you have some photos of the dish + receiver equipment?

You can find some in depth information here: http://www.astronomy.ksclub.org/knro/KNRO_Propasal.pdf

I will post some details photos later on in this blog.