Glad to announce the release of KStars v3.5.0 for Windows, MacOS, and Linux. This release marks a significant milestone for KStars with the integration of StellarSolver, the Cross Platform Sextractor and Astrometry.net-Based Internal Astrometric Solver.

Robert Lancaster spent a significant portion of 2020 developing and refining this amazing library. Here is an excerpt from StellarSolver Github on the motivations behnd its development:

Astrometry.net is a fantastic astrometric plate solver, but it is command line only and has many dependencies such as python, netpbm, libjpeg, cfitsio, and many other things. It is fairly easy to install on Linux and works incredibly well in that environment. With the correct recipes in homebrew, craft, macports, or other package managers, it can be installed and run from the command line on Mac OS X as well. On Windows, however, it must be run within a compatibility layer such as Microsoft Subsystem for Linux, Cygwin, or Ansvr. None of these things will stop the program from running, but it does make it more difficult to set up and use and all of the files and dependencies and configuration files must be setup properly in order to get it to work. 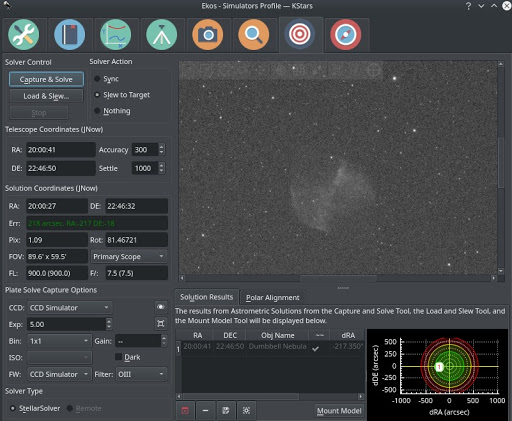 It took significant re-tooling inside KStars to integrate StellarSolver, but right now we are confident in the benefits in will bring to all our users. For the first time since Ekos was developed back in 2012, KStars does not require any external applications to perform any of its astrophotography related tasks. The solver is completely built-in and supported on all platforms equally. Windows users would be glad to learn they do not have to download and install extra programs to get the astrometry functionality to work. 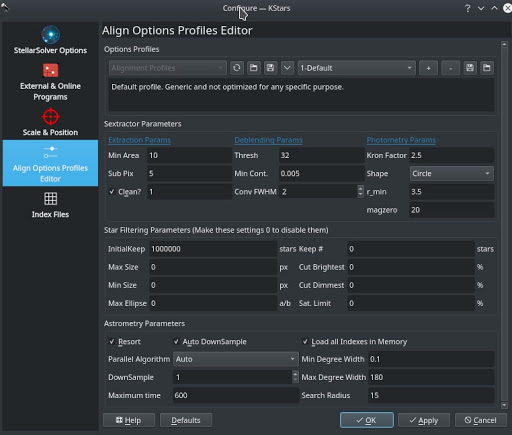 But StellarSolver is not only limited to astrometry, its major function in Ekos is actually for star detection. Therefore, it is now used in Capture, Guide, and Focus modules as well. Future versions should pave the way to perform photometric calculations right within FITS Viewer.

While the name remains as FITS viewer, we also added support to load JPG/PNG and RAW files from DSLR cameras. Granted, not all the features of a FITS file is going to be available, but this feature has long been requested by users and now we finally have it baked in! 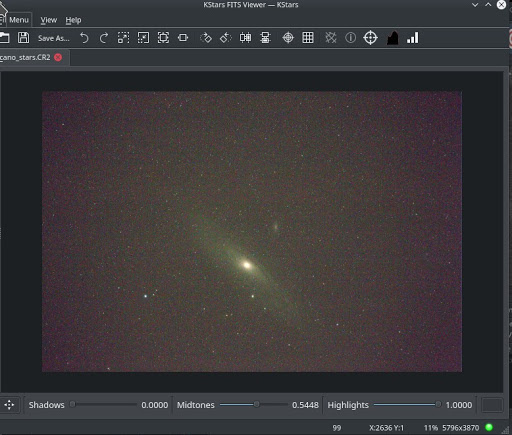 Hy Murveit introduced a new Ekos module to help analyze the imaging session in details. It records and displays what happened in an imaging session. That is, it does not control any if your imaging, but rather reviews what occurred. 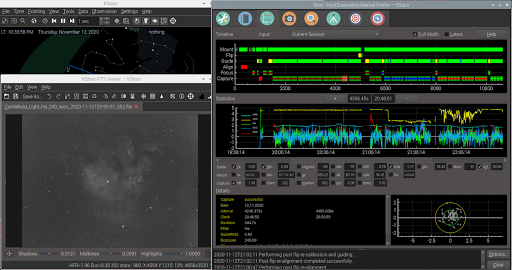 This release culminates 3 months of continued incremental improvements to KStars testing framework spearheaded by Eric Dejouhanet. These tests cover both Unitary tests and User Interface tests. While we are still far away from covering sufficient tests for all KStars uses, it paves the way to Test Driver development approach in which tests are created to illustrate the issue and then fixes.

MR #114 by Wolfgang Reissenberger perfectly highlights Test Driven development and we hope to follow this model in upcoming releases.

What about the android version? It's been broken for months https://bugs.kde.org/show_bug.cgi?id=415121