KStars v3.5.2 is is released on March 1st, 2021 for Windows, MacOS, and Linux. This release incorporates significant improvements to Ekos Polar Alignment Tool in addition to supporting manual rotations in the Alignment Module.

Brodrick Bassham added a manual rotation dialog to the Alignment module in Ekos for Load & Slew. Now users without motorized rotators can adjust their camera manually in order to achieve the desired frame orientation. Check the video below for a demonstration of this feature. 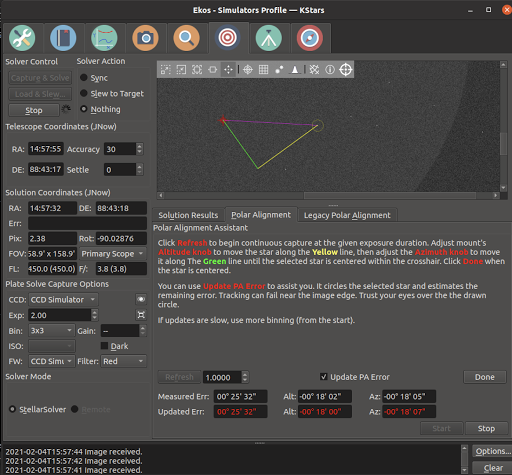 Eric Dejouhanet fixed a few issues in Focus module including restart and detection of disconnected focusers. Furthermore, a number of issues detected by Coverity scans (MR 214 & 216)  were addressed in this release.
To reduce memory footprint on device with low resources, an Adaptive Sampling option was introduced to conserve memory when displaying images in the FITS Viewer. It checks the available memory and performs on-the-fly downsampling of images to reduce memory consumption. This only affect the display and not the actual data.
Posted by Jasem Mutlaq at 3:50 PM