I'm glad to announce KStars first release of 2019: v3.1.0 for MacOS, Linux, and Windows. This release focuses on improvements to stability & performance of KStars. In 3.0.0, we introduced quite a few features which resulted in a few regressions that we worked hard to iron out in this release.


Eric Dejouhanet fixed a few bugs with the Ekos Scheduler along with making steady improvements to cover all corner cases for multi-object multi-night scheduling which can become quite complex.


Eric also added a new feature to the Focus module: Ring-field focusing. This method limits the area which stars are detected between an inner and an outer ring. This can be useful in images where
galaxies or nebulaes can be mistaken as stellar object which often lead to erroneous HFR reporting.

This can only be used for full-field focusing. 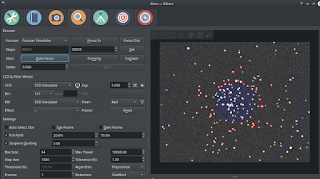 
Wolfgang Reissenberger migrated the Meridian Flip handling code to the Ekos Mount tab. This makes meridian flip possible even if there is no capture process going. If the mount is tracking and passes the meridian, it can be triggered to flip now in the Mount Module.


Sebastian Neubert introduced manual workflow for users who would like to use Ekos Polar Alignment Assistant Tool with manual non-GOTO mounts. Now the users are prompted to rotate the mount when it is required to do so until the process is complete. This is Sebastian's first code contribution to KStars, welcome to the team!


Robert Lancaster developed a comprehensive script along with detailed documentation for building KStars with Craft on MacOS. This enables users to wish to either develop for KStars or use the latest bleeding edge versions from trying it out with a single script that pulls all the sources and compile them accordingly with the aid of KDE's spectacular Craft technology.


The LiveView window received a few enhancement to enable zooming and panning for supported DSLR cameras.

Now I'm installing add-on's which come from kstars-devel and I miss some progress bar or other progress indication. For example at the moment I'm downloading USNO NOMAD Catalog, which size is 1.4GB... It takes forever with my slow connection. Would be great to see how much percent has downloaded :)

Keep it up! Great work!

Good stuff folks. Thanks for another release.

I'd like to revert one feature where I don't want the FITS view to come to the forefront each sub as I like to watch my sessions from the main session tab, where you already get the current image, # of subs left, auto-guide star etc etc.

Is it possible to disable that feature at all?